56 YEAR OLD FATHER OF FOUR, OSTRACIZED BY KINSMEN SLEEPS IN THE FOREST WITH FAMILY TO ESCAPE  ASSASSINATION   BY  KINDRED BROTHER.

56 YEAR OLD FATHER OF FOUR, OSTRACIZED BY KINSMEN SLEEPS IN THE FOREST WITH FAMILY TO ESCAPE  ASSASSINATION   BY  KINDRED BROTHER.

A 56 year old father of four children, Mr Uchendu Iroka, from Umuanyaegbu Family, Nkata Alaike, Okaiuga Nkwoegwu, in Ohuhu, Umuahia North LGA of Abia state, has petitioned the Assistant Inspector General of Police, AIG Zone 9 police, Umuahia, Mr Isaac Olutayo Akomoyede, asking him to intervene and save him from the hands of some of his kinsmen, who have concluded plans to waste  him and his family members, after ostracizing them.

The petition, captioned “Serious Threat to Life, and concluded arrangement to eliminate Mr Uchendu Iroka at all cost by one Ozoemenam and his cohorts, was dated May 12, 2022, and was received at the AIG’s office on May 13.

He alleged that the reason for their plot was because of his refusal to allow an enemy of the family to continue to live with him in his father’s house pending when he build his own house.

Iroka narrated how Ozoemenam, his kindred brother, and Chairman of Kindred meeting single-handedly ostracized him, and wanted the lager Okauiga community to follow suit, which many people faulted,  and refused.

“As a result of his failure at the Community level, he resorted to threatening that he would  eliminating me, and would have  succeeded when he invaded my compound with some hoodlums  on May 5 this year, but  for God’s  intervention. My tenant called my attention to two bus load of thugs and a car, and on seeing that they were trying to scale my fence, I escaped into the forest for safety with my family members”.

Iroka who spoke from an undisclosed hideout  said that since May 5th, he has not known any peace as he has been hiding from one forest to the other with his wife and four children, to avoid being captured by his assailants who have vowed to eliminate him and his family members. 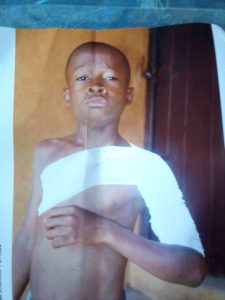 He explained that in one incident,  his assailants beat his son Ugochukwu Uchendu to a pulp and broke his left hand, “my  offense being  that I refused to abide by a decision of the  the family meeting to allow an enemy to continue living  with me  in my father’s  house.”

“This was a man my father built a house over fifty years ago and gave his father  one room and they have   lived in that one room for many  without building their  own house.

“I realized that he wanted to start trouble and so asked him to leave. And when the family meeting looked into it, they advised me to allow him to stay until he builds his own house and I said no, since he has started raising this rumor, he should leave before  he comes up with something more serious.

“It was at this point that Ozoemenam , who was appointed a family meeting Chairman  in January vowed that he would force me to abide by the family decision, and I refused and said that I would take my matter to another place for justice.

In his reaction for my refusal, he brought in hoodlums to eliminate me so that his decision of allowing my enemy to stay in my house will be achieved.

The stern-looking hoodlums  informed my tenants to tell me  that they came from Enugu on a mission to waste my  life and that they woud be coming back.

“It is believed that they are hired to assassinate me, because if they were security operatives, they would have dropped invitation or disclosed where I would  meet them, but they only said that they would be coming back and that when they do, it would be a different story for me.

“I therefore urge the AIG to come to my aid and rescue me with my family members from the hands of Ozoemenam and his cohorts who have decided to take laws into their hands to eliminate me and my family members, an innocent citizen.

He said that he manged to go to Zone 9 to drop the petition and ever since, they refused to honor the invitation extended to them by the Zone 9 police.

“I am calling on the relevant authorities, to as a matter of urgency, come to my rescue from the clutches of the blood thirsty gang of evil doers. END