APC CHIEFTAIN IN UKWA WEST TASKS LGA/WARD CHAIRMEN ON CHALLENGES AHEAD, says “NO VICTORY NO VANQUISHED.” 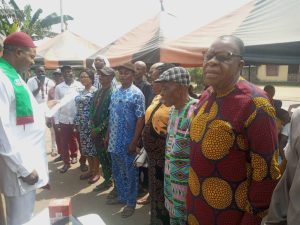 A  Chieftain of All Progressive Congress, APC, Hon. Uruakpa Sterling Chinwe has informed   the Local Government Executives and Ward Chairmen of Ukwa West LGA of the serious  serious tasks ahead of any member of the party in the  zone, urging them to be assiduously committed in the tasks as victory is certain at the end.

He gave the advice after the inauguration of the party leaders in the LGA, charging them to be up and doing as well as to embrace new members and have a consolidated Exco. 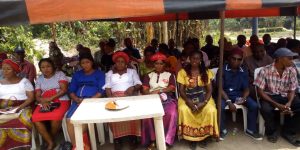 In his reaction Chief Nwogu Nwogu, another Chieftain of the party encouraged all the party faithful to be steadfast in their duties, adding that this time, it is someone’s work that will identify him or her from the crowd.

The Chairman of the LGA conducted the inauguration with the supervision of Chief Nwogu and Hon Uruakpa as directed by the State executive council.

The inauguration, which started by exactly 1:15pm lasted for two hours with all members expressing happiness over the peaceful conduct of the event.

The turn out of the ceremony was highly impressive as members from all over the LGA to winess the event.

In an interaction with Sunnews Times after the event,  Uruakpa assured all party members that everybody has right to belong to the fold as there is no longer faction in the party.

He disclosed that with  the inauguration of the  Local Government  Executives and Ward Chairmen that there is no Victor and no Vanquished, and assured that any member, found disparaging any Elder or another member on party basis will be severely disciplined according.

He maintained that ASA people are known as a people that are peaceful with maximum respect for the elders.

“Ukwa west is a local government that’s is in peace, and an LGA that has maximum respect for elders.We can disagree,protect our political interest keenly, but when it comes to respect we don’t look down on our elders,but can humbly vote out any elder who is not doing well with his political position.Voting him out is a necessity, its an obligation we owe him/her for the benefit of our generation,he concluded”, he explained.

He called on party members to feel free to embrace Elder Uju Nwarie leadership and give full support to his government, reiterating that there are a lot of task ahead for a total liberation of Asa against further political selfishness and miscalculations which have  plunged the land into perpetual backwardness and suffering.

Reacting to a question about other leaders who are not with High Chief Ikechi Emenike,he answered that the genuine APC members are intact in APC and that Ukwa West APC has set up a committee by the  instance of the leader,Chief Nwogu N Nwogu,to reach out to all aggrieved members, that the committee will commence on its assignment soonest.

He also maintained that no one is more important in the party than another that everyone will be given equal right and justice . END