HOW ENVIOUS KINSMEN BRANDED MY SON A WITCH AND MURDERED HIM  IN COLD BLOOD…..75-YEAR OLD FATHER OF SLAIN EBONYI BUSINESSMAN.

Pa Nweke, from Ohaechara village of Inyere Community, in Ezza North LGA of Ebonyi State, the father of  Chief Okechukwu, a 31 year-old prominent Onitsha based businessman, has narrated how his son was murdered in cold blood over allegation of witchcraft.

He explained that the  wealth of his son attracted envy from some of his kinsmen, who  ganged frame him a witch, tortured and eventually murdered him in cold blood.

“On that fateful day, our Ezeogo asked them to take my son to the police over the allegations they leveled against hi, they agreed, but immediately they left his palace, they tied ropes on my son’s waist and neck, dragged him along the road like a goat, and began to beat and torture him mercilessly. “I cried to them;  begged them, they continued until they  killed my son”, Pa Nweke lamented. 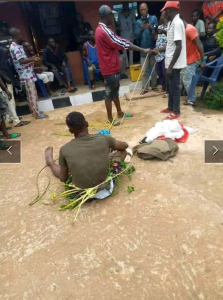 “If you know the story of Jesus Christ, that’s how Okechukwu was tortured until they reached Ohaechara playground. After some time, our Councilor came and told them that Ezeogo said they should take my son to the police. “Upon hearing that, they held  a brief meeting among-st themselves, tied my son’s hands backward, carried him in a motorcycle, and told us they were going to the police. I made to follow them, but they asked me to go back. Very shortly, they came back to tell us that my son slipped off their hands and fell into the Akadoro river. Up until now, we have not seen my son, neither has his corpse been found”, Pa Nweke cried louder.

“They have killed my son out of envy, he was a Sabbath worshiper and never killed anyone to make his money, neither is a he thief. He was doing good business in Onitsha and has been helping me and his younger ones, and now they have murdered him. After throwing him into the river, they went through his phone and transferred five million naira from his account.”

“The incident occurred on  August 28, 2021 after branding him a witch, that he was responsible for the strange misfortunes that befell their village”, he  said.

It was learnt that late Okechukwu Nweke  went to the bank of  Akadoro river to observe prayers as a member of the Sabbath church. He was wearing a red garment when they caught him, tied him and dragged him to the village square where he was beaten to death.

He told them that he was a patent medicine dealer at Ogbo Owu market, Onitsha Anambra state but all his plea fell on deaf ears. They tied his hands and threw him into the Akadoro river where his body is yet to be recovered.

This trial by ordeal and horrific murder of Nweke took place in a village square. Some of the community leaders were at the scene. A source said that the local councilor was present. Some of those who allegedly took part in this gruesome exercise include Mr. Ikpa Nwaji, Mr. Sunday Nweke, Mr. Kenneth Utobo, and Mr. Monday Eleta (a.k.a Oso Enuigwe).

But over two months after this horrific murder, the police is yet to make  arrests or conduct any investigation.

A relative of the deceased said that the matter was taken  to the police, but nothing reasonable  has been heard since then, “because we learnt that one politician from the village went to the police after we had left to frustrate the matter”. END

WHAT WILL HAPPEN TO TROUBLE MAKERS DURING ANAMBRA ELECTION.