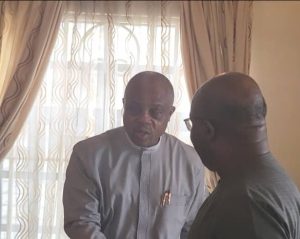 The event is happening now at the country home of the retired Army General in Ovim, Isuikwuato LGA of Abia state.

About 10 other Generals and Army Chiefs also declared their intention to join the party which has vowed to rescue the state from misrule.

Some of those whom Sunnews Times can immediately remember their names include Major Gen. Jack Nwogbe, Major Gen. O. OKoro, Major Gen. C. Abraham, Commander Ochiabutor to mention this few.

Details of discussion at the event will be made public by Sunnews Time as soon as it gets into our news Desk.

Pictures of the occasion is hereby published for sighting and authenticity. END

ABIA APC COMMENDS BUHARI’S WISDOM IN SIGNING THE ELECTORAL BILL INTO LAW, says; States’ mandate can no longer be stolen, nor citizens groan under confused and incompetent leaders.