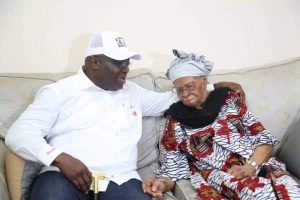 Abia state Governor, Dr Okezie Ikpeazu has stressed the need for Abians to use opportunity of the final exit of the  spouse the premier of Eastern Region, Dr Michael Iheonukara Okpara,  Adanma,  to reawaken the  strength, resilience and entrepreneurial spirit of the people of Abia to move the state forward.

He thanked God for giving Abia the enigma called Okpara, who recorded great achievements,which are yet to be surpassed by leaders dead or alive.

Ikpeazu described the event as a moment of sober reflection, which  marks the end of a glorious era of Okpara, who was the  Premier of Eastern region. 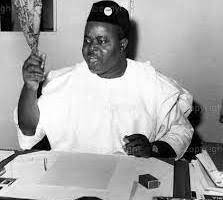 He recalled that in the days of Okpara as the Premier of Eastern Nigeria, the economy was one of the fastest growing ones  in the world, and  regretted that some  South East Governors, were not present to bid her final goodbye.

He also expressed disappointment that  the Federal Government could not send  official representation to honour the late spouse of late Dr Okpara, who brought accolades to the country in general and the region in particular during his days as Premier.

He however described late Adanma Okpara  as a humble woman, who personally touched his life, adding that he learnt a lot from her and promised to sustain her legacies as much as he would.

After the funeral service at Williams Memorial Grammer school, Afugiri, her remains was laid to rest in her county home,  Umuegwu Okpuala, in Umuahia North LGA.

Late Lady Adanma Okpara, a Knight of John Wesley of the Methodist Church, was aged 99 years, and is survived by five children,  many grand and great-grandchildren, among whom is one time  Chairman of People’s Democratic Party(PDP) in Abia State, Chief Uzodinma Okpara.

Abia’s  Decay dated back to past administrations, but has become worst today…..Okoroafor, APC Deputy Minority Whip.

“He forced me to smoke marijuana, raped me,  and took pictures of my nakedness” …Female Victim tells Akwa Ibom court.

“He forced me to smoke marijuana, raped me,  and took pictures of my nakedness” ...Female Victim tells Akwa Ibom court.