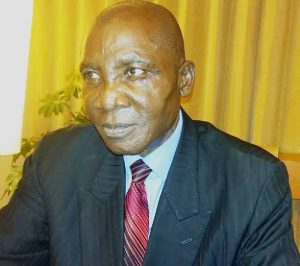 The Senator, Representing Abia Central in the Senate and Former Governor of Abia State, Chief Theodore Ahamefule Orji, has described his kinsman, and a Chieftain of the All Progressives Congress, APC. Chief Benjamin Benedict Apugo,as an Illiterate, who does not deserve to be responded to,  because he does not have any education from primary to university level.

This was in a twist reaction to Apugo’s allegations against the Senator, whom he described as Corrupt in addition to calling him many unprintable names while granting interview to  a national newspaper recently.

The Former Governor, who was recently voted as the best performing Senator, said that Apugo lacks the moral right, and justification to call anyone corrupt because he is facing corruption charges in court.

He said that as  a public servant, Economic and Financial Crimes Commission, has it as part of their primary function to investigate any public officer, and that if the officer is found wanting, he would be charged to court.

“I have not been charged to Court, then someone who the EFCC after their investigation has charged to Court for land grabbing has no justification to call  another person Corrupt”, Orji argued.

He accused Apugo of haven tried to frustrate the citing of Central Bank of Nigeria, CBN in its current location, adding that he was still a  Governor then, when Prof. Chukwuma  Soludo, the Anambra State Governor elect, who was the Central Bank Governor came for the construction and that Apugo made trouble, until he was  paid a whooping N500 million.

Orji  queried if a man who EFCC has investigated and sued to court for corruption and land grabbing has any moral grounds to accuse another person  of corruption, and reiterated his stand to quit active politics in 2023

He explained that he is a man of his word, who will always keep to his promises each time he make any.

“When I say a word, I try to keep it. I said that I will quit active politics by 2023 and I stand by that. Our people love me, they voted for me twice as Governor, twice as Senator, how else can a people demonstrate love if not by so doing?”, he queried.

He explained that if people like him do not quit politics, there would not be any other way of creating space for the younger generation and those who are not too young show their talent in politics.

On the 2023 Governorship election in Abia, Senator Orji  said that he has carefully avoided making any statement on the Governorship tussle in Abia because he is yet to confer with the Governor, adding that he can only speak after discussing with the incumbent Governor. END

What 60 yahoo boys were doing in a Hotel when they were arrested by EFCC.

What 60 yahoo boys were doing in a Hotel when they were arrested by EFCC.