A Chieftain of the All Progressive Congress in Abia, Hon Mark Ugorji has said that Abia under his party has a very bright future, and called on Abians to join a moving train.

He made the prediction while thanking God for sustaining his marriage for twenty years at this time when marriages are collapsing like park of cards and giving him the enablement to be awarded the fellowship  of the Nigerian  Institution of Estate Surveyors and Valuers, which is the peak of his profession.

The ceremony, which took place in his Country home, Okwu Olokoro, Umuahia South LGA of Abia state  drew men and women of prominence, including APC members  from all over the country and beyond .

Speaking during the  ceremony, Ugorji said that there is a score card to check what one  has done as a member of that institution before he can be awarded a fellowship title.

Being a fellow  of the Nigerian  Institution of Estate Surveyors and Valuers is like becoming a Senior Advocate of Nigeria, SAN,  in Law Profession, It is the highest level to attain in Real Estate profession.

After one has become an  Associate, he will  wait for a long period  not less than ten years, practicing, and doing other  kinds of jobs that will promote the profession, in addition to training younger Surveyors, to get them to become associates, before he can aspire to become a Fellow of the Nigerian Institution of Surveyors and Valuers.

Once the  important tasks are taken care of, one  can now be bestowed with  a Fellowship award  of the Institution, and such achievements calls for a thanks giving to God, who has seen  one through.

But, there are still people who cannot be awarded the fellowship status, throughout their practice as Surveyors for not measuring up to the set standard in the profession.

For people like us, it is God that has made this possible and so the family decided to thank him for his grace. In addition , God  has also sustained  our marriage for twenty years.

“We are now the senior members of that institution, we are like authorities in the field of Real Estate. Today a lot of people have passed through us and because of the level of our proficiency , we have done major Federal Government projects , contracts and consultancy services, as well as  private projects .

After becoming an associate, one practices for at least 10 years within which he or she  must have shown some level of proficiency, competence and professionalism in the practice. When you get to ten years and you are a financial member of the institution , with  yearly subscription and  haven trained younger surveyors, with a befitting office at  the right environment, as well as established branches across the six geo-political zones of the Country, which we have, you will now need to prove yourself by undergoing certain interviews that will enable you to become a fellow of Nigerian Institution  of Estate Surveyors and Valuers.

It is also competitive because when we were doing it there are people that did not succeed in the interview, Which means that what one gets within ten years, another can get it after twenty years. But ours is a Unique grace and abilities to do things one time and get it. It was based in these things that we decided to thank God for his grace and mercies. 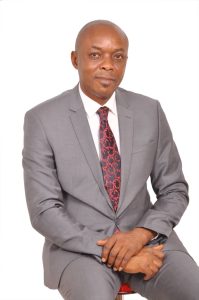 That is what we enjoy as sons of God. Somebody who does not love God, who does not believe, God sometimes allow them to go so high so that when they will fall , people will hear their noise. For me as believer in Christ Jesus , I encourage people to first of all find their place in Christ, it is very very key, when you do that, that is the time you can have an enduring wealth, good success. In the Bible, if you go to the book of Joshua, chapter 1, from verse 8 down wards, it says that this book of the law should not depart out of their mouth, you should meditate on it day and night, through that, you make your way prosperous , it is you that can make your life prosperous. In this life, some people like the hard way and the hard way is by going to Native Doctor, the Yahoo way , armed robbery, joining of secret society,  etc, but for us we have the easy . All we just want to do is to do the will of God and God’s will , will come your way. So we don’t struggle to make money or get material wealth, but there are people that kill to make money and what they are eating is blood . And that wealth does not stay in that family because when the man dies, that money fizzles out and that family starts to suffer, but as a believer, you will live long and when you eventually go to be with the Lord, that wealth will remain.  You will actually extend heritage to your family, you will also see that when you make money, your children will not quarrel over your wealth. Like me, I am the first son in my family, I decided to leave everything our father had to my younger ones, and fro the time I took that decision, I knew that money would not be my problem. Everything that my father left as inheritance for his children, I left it fr my younger ones. It is God that made me do that.  From the day I made that decision, money has never been a problem to me. I have an uncommon and trust in God that I will never be disadvantaged in life and God has proven himself to be a righteous and  band steadfast God.

Thanks giving is like a ritual in our family, we thank God every year for life, in 2020, people had issues, lacked money because of Co-Vid 19 etc, businesses were destroyed but ours was not destroyed, people went t hospital for one ailment or the other, but we never went to anywhere for such thing. My children are fearfully and wonderfully made, in their studies, all of them came first in their various classes. We never had any issues, even the type that takes people or families to hospitals. We don’t have family Doctor in this family, Christ is our family Doctor. For the past 20 years, nobody in this family have had a critical issue that will make him or her to be referred to hospital .  When we pray God answers us. Misunderstanding came a year in to our marriage and we began to learn and understand, as well as train ourselves, and when two people from different back-grounds starts living together, they don’t initially understand themselves no matter how long they dated before getting married. There would be that period of trying to adapt to each other, so it takes place and this took place during the early stage of our relationship, and after that we started prying and staying together as the Bible says. We do everything together, we talk a lot, there is no lacuna in our relationship, we don’t create that we have also gone throne training from men of God who made us to know that you can switch your mind when you are angry, so that you can begin to think of what will not make you angry.  And we found out from the Bible that anger dwells in the bosom of the foolish man, so we decided that none of us should be foolish.

Reacting to the question on whether the PDP Government in the state has done well, he said that a lot more needs to be done to ameliorate the condition of Abia citizens.

It was as a result of that thanks giving, that we decided to do a 2 kilometer road for our people to prove  that the Government in the state is not doing well, because if an individual can do a 2 kilometer road, very sound and qualitative road, asphalted, done under three days, then the government should step up , they should up their efforts to ensure that Abia state is developed. .

We did that to help the people so that when you are going out, you will not face the problem of bad road.

In terms of politics, we have ambitions and aspirations and as a core member of APC, we are looking at a lot of options and I believe that it is too early to start saying, I am doing this or that, all I want to tell Abians is that the future is very bright for the people of Abia state. With people of our character, charisma and clout to be on board when the chips are down. We will surely run for election , we will surely present ourselves and Abia under our party will become an enviable state to copy . END