Hon Nkeiruka Onyejiocha is one Christian woman politician who has established an indelible mark in the sand of Nigerian politics. She  was born in Umuada Ngodo Isuochi, in Umunneochi Local Government Area of Abia State, and has held several political positions in Abia state, including the Commissioner for Resource Management and Manpower Development, Local Government Chairperson,  a fourth time Member of House of Representatives and is the current  Deputy Chief Whip of the same house , where she is  representing Isuikwuato\Umunneochi Federal Constituency in the House Representatives. 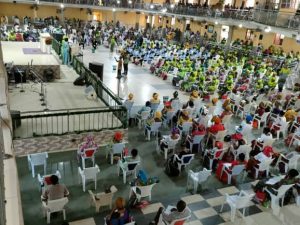 Her legislative interests borders on sponsoring bills to enhance the standard of living for Women, Children, Youths and the less privileged.

As a woman politician, she has made remarkable impact in the development of her constituency in particular , and Abia State at large. She has been delivering  good and lasting democratic dividends to her constituency and Nigeria at large through responsive legislation.

Just recently, the Hon member, who is one of the few successful Christian women in politics and a staunch member of the Mountain of Fire and Miracles Ministries MFM was at  one of the Church services, just to tell her fellow Christian women, the harm  their absence in politic has done to their families and wards, as well as the country at large.

The theme of the conference was  “The Flourishing Woman”

Picking her text from the book of  Esther 5:1-8, Onyejeocha said that if the Biblical Esther had  not made a move when Haman was planning evil for her people,  she wouldn’t have saved them  from the atrocities of their enemies. 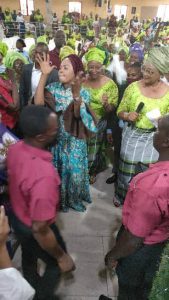 She urged women to  make themselves available so as to affect lives positively, enjoined them to register as the electorates they are, and pick their Permanent Voters Cards (PVC),  saying that it is PVC that determines who governs them. She also urged women to belong to political parties, and enjoined men to support their wives to embrace active politics.

Some women are not in politics today because people regard them as harlots but it is not so. Christian women should involve themselves in politics because God Himself ordained that a woman will be a helper to the man as the man and members of the society need help.

If Christian women are in politics they would stand in gap for the people and ensure that salaries are paid, developmental projects are carried out for the people and the  benefits will include making laws that are Christian friendly and affecting lives of the indigent and people of the State positively among others, she explained.

God created a woman from the rib of a man and called her a help meet, which means that you will help your husband in politics also. If you are a woman and refuse to join politics, you are not obedient to God. Surrendering your life to  Christ is the only way to have good success. No matter who you are, without Christ, you are a nobody, the only way to succeed as a woman in politics is to be in Christ. Some women are not in politic because they don’t want to be called names. I am in politics today, but I am not playing politics. The only protection that is germane to a woman or man in politics is that of Christ. I have seen so many people among you who are qualified to be in politics, come out and show a difference,  the Honorable member urged the Christian women in the church.

She listed seven characteristics  every Christian woman must possess to succeed in politics, which are determination, humility, hard work, loyalty, kindness, courageous and faith.

She  charged Christian women not to neglect the altar of God in their houses, adding,  with this, the society can be reformed,  maintaining  that “nobody  can succeed without Christ. Without Christ, it is impossible to be in politics, business or any other venture and succeed.

If you know what those who does not know Christ go through, you will not be envious of their wealth.

Develop interest in politics to be able to provide not only for your immediate family but for many others. And that you can do by voting in the right Christian candidate into power. If non-Christians in politics does not fear God by doing the unthinkable, do you think that they would be afraid of you when you don’t have what they want like voters card, if Esther did not go through pain to stand for her people , one can imagine what would have been the fate of the Jews today.I don’t have godfather in politics, but I have God the Father, and I make use of my opportunity as a Christian woman and he sees me through, she advised. 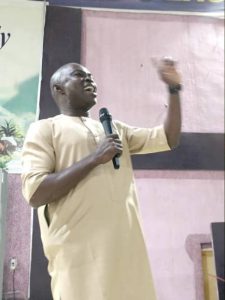 The Regional Overseer of the Church, Pastor Gbenga Aremu thanked Onyejeocha for finding time to talk to the women during the conference.END